Baking soda and baking powder are in a lot of baking recipies. But why? And what is the difference between the two?

Of course, baking soda doesn’t spontaneously turn into carbon dioxide while it sits on the shelf. To get the chemical reaction to occur there has to be an acid. Acid is present in many foods like cream of tartar, lemon juice, cocoa, or vinegar. 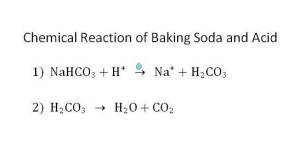 Baking powder combines baking soda with the acid it needs to create carbon dioxide. To prevent the two components from mixing and reacting in the container, baking powder also has a drying agent such as corn starch. Without moisture, the reaction can’t happen.

If you look at the ingredient list on baking powder, you’ll see some pretty crazy names. Believe it or not, sodium aluminum sulfate (Na2Al2(SO4)4) and monocalcium phosphate (CaH4(PO4)2) are the acidic conponents. Although both of them react with baking soda to create CO2, the reactions happen under different conditions. One is slow-acting and the other is fast-acting. Having both makes baking powder more foolproof than baking soda.

Let’s say you are making muffins and the recipe calls for baking soda and a fast-acting acid ingredient like cream of tartar. You put all the ingredients together, put it in a mixer, and forget about it for a while. Those muffins are going to be flat. The baking soda reacted, made CO2 bubbles, and many of those bubbles escaped out of the batter before the muffins cooked. 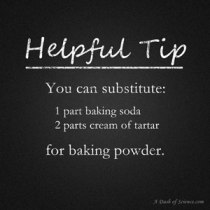 Baking soda and baking powder are leavening agents. Baking soda needs an acidic ingredient for it to do its job. Baking powder is a mix of baking soda, acids, and a drying agent. Both leaven by creating carbon dioxide through chemical reactions. Who knew that baking and science experiments were so similar?